I’m pleased to report that a project I had been nursing for most of this year has reached a milestone. At the beginning of this last semester, I kicked off a track inside our local high school (Chagrin Falls High School) to get teams of students collaborating on building mobile apps – not just programming but developing all of the skills required for a successful app launch.

Today, the first apps went live and they include:
CFDC Calculator and
CFDC Flashlight

Both apps are simple to begin with – BUT remember, these are the work product of a new and educational program where high school students work in small teams focusing on developing programming, product management and marketing skills.

These apps also generate usage analytics (nothing personally identifiable) and include a feedback page. Students will review the analytics and user feedback to improve future versions – so please download these apps, give them a spin, and provide feedback. Do it for the kids!

The objective of the program is to organize students into teams where they would not only build a mobile app, but publish that app in a global marketplace and monitor its adoption and usage “in the wild.”

The goal of the program is to teach students the importance of the “total lifecycle” of an app from idea to creation to publication to adoption to continuous improvement. Obviously, today’s high school students are truly an “app generation” and it always kills me that the myriad of career choices beyond development are never highlighted – and given that this is an exploding multi-billion dollar market and I’m based here in Ohio – I wanted to make sure our local students knew what was available to them right now. What should be built? For whom? How is my app doing and what can I do better? Chagrin’s students will have a head start in knowing how to answer these questions in a global marketplace.

The process included organizing the early volunteers into teams and working with them to develop ideas that they could bring to market. Microsoft provided phones and software and had a technical resource drop in for some general instruction as well. PreEmptive Solutions provided the analytic software so that students could measure how their apps were doing.

Posted by AppsRpeople2 at 12:03 PM No comments:

A/B Testing: to grow your business, know your people

In early June 2012, the Yoga-pedia user-base surpassed the 60,000 user mark and, in spite of the app’s apparent popularity, I had to admit that I was not being particularly effective in monetizing this growing community. The Mobile Yogi’s business model has always been about white-labeling the fee-based “A Pose for That” for yoga studios, retailers and other wellness-centered businesses – Yoga-pedia was conceived simply to accelerate adoption of A Pose for That (see Increasing App sales with Analytics: Free apps versus trials) and, while Yoga-pedia does generate some ad revenue; the ads themselves were really intended to be little more than an irritant and, therefore, another reason to upgrade (the paid app is ad-free of course). …but I had a growing sense that this community was most likely an under-utilized (and therefore undervalued) asset; but how to turn this hunch into revenue?

I needed to find something that I could market other than an app upgrade.

First, I took stock of what I already knew about my users. I realized that the analytics that I had been collecting up until this time had certainly helped to improve user experience and software quality, I really had very little insight into my users’ interests and desires beyond their interactions with my app’s specific features.

In fact, all I knew for sure about my users was:
a) That my users all have an interest in yoga (they use my app) and
b) When they were in my app, they are actually thinking about yoga at that moment in time.
– But how to parlay on my limited insight into something actionable?

The element I chose to vary was the “contextual ads” being served up, in this case, by Microsoft’s adcenter.  The B “challenger” was a set of 3 different faux ads promoting yoga clothing, yoga training, and yoga retreats as follows:

The result is the following A/B behavior:

And of course, I used Dotfuscator to inject analytics to track:


I added the method, WhatAdWhen, that takes 3 string parameters, the page being shown, the ad being displayed, and the event, e.g. New Ad, Ad Engaged (clicked), or Ad Error (only applicable to AdCenter served ads).  The method does nothing, but I grab the parameters and send it to the Runtime Intelligence Service using Dotfuscator to inject the instrumentation. 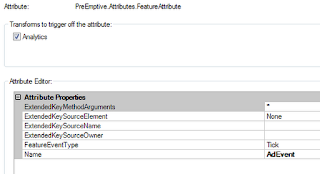 The * is all I needed to include to have Dotfuscator send all three values to the Runtime Intelligence Service… So what did I see after a few days in production? 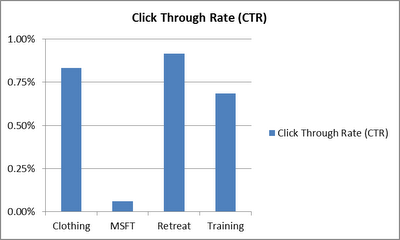 Perhaps not surprisingly, yoga-focused promotions outperform contextual ads by almost 10X – given my current volumes, I expect to generate over 3,000 highly qualified clicks per month.

Now when I last checked, Google estimates that it would charge $150 per month for 175 clicks on “yoga clothing.” Put another way, Google would charge roughly $3,000 per month for the leads I can generate for my yoga business clients today (focusing only on US-based users – not global). Now that’s the seed of a business – build well-defined, highly sought-after communities (like yoga consumers) and then find ways to connect these communities to businesses that value them most. …and this compliments perfectly the original plan of delivering white-labeled yoga apps… with this evidence, we have already recruited some small yoga businesses to actually reduce their Google ad spending and divert those funds to pay for both white labeled yoga apps and the promotion of their businesses to my growing cadre of mobile yogis.

If you don’t measure, you can’t improve – and with in-app A/B testing, you can measure more than just software adoption – you can glimpse inside the mind and motivations of your users – and that is the key to any successful venture.

Posted by AppsRpeople2 at 1:19 AM No comments: