We are deep into two WP7 dev surveys, but I just love this stuff and so I'm going to leak some preliminary data out now – if you want me to send you a link to the final results, send me an email at sebastian at preemptive dot com.

The first survey we are doing goes back to the earliest group of WP7 developers, “first 300,” and asks how they have made out over the past two months.

The second survey targets roughly another 1,500 active wp7 devs who are using analytics and/or obfuscation but who began their work after the initial survey.

Here are a few tidbits that we see so far…

Going back to the original 300 and asking those who had deployed apps with analytics, we have found that:

With regards to their specific WP7 app in the marketplace, the devs directly credited their use of RI as:

In the first 300, only 4% of the registered developers targeted two or more additional mobile platforms. This indicated to me at least that the very first developers to develop for WP7 were already MSFT devotees versus serious mobile app developers exploring WP7 as an alternative/incremental mobile platform.

However, in the latest wave of developers, that stat has more than quadrupled. There is no question that developers who identify themselves as mobile app developers first rather than iOS, .NET, or Android developers are building for WP7.

Platform share for those developers targeting multiple mobile platforms are (in addition to WP7):

There’s a lot more to come – so stay tuned (or shoot me an email). Cheers!

Posted by AppsRpeople2 at 5:45 PM No comments:

Riddle me this! Where can French, Italians, and Germans all agree? 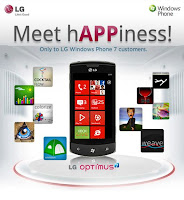 Well, apparently, its in their tendency to pair wine with spicy Chinese food.

How did I come up with such a farfetched notion? The answer to “how” is “easily” when I started with a WP7 app like VinoMatch’s Mobile Sommelier that was instrumented with Runtime Intelligence for Windows Phone. But let me back-up a little.

On Nov 4, 2010 MSFT and LG announced that LG Owners Get Free Access to Popular Windows Phone 7 Applications. You can read more about the 10 premium apps and another 10 LG-specific apps on LG’s Facebook page here. They call the program “hAPPiness!”

Anyhow, it turns out that all 10 of the premium apps were instrumented with Runtime Intelligence and have been sending analytics since the January launch of the program.

Last week, Microsoft invited lead developers from all ten development teams on campus for three days to gather feedback as well as to hold some specialized training on a variety of technical topics – and I was fortunate enough to be invited to lead a discussion on best practices for incorporating mobile analytics into the development process. In support of this presentation, I was given permission to look into the runtime data that these 10 apps had been collecting to see what I could see.

The 10 premium apps that are free from LG through March 10th are:

While I can’t share the entire presentation here, VinoMatch and Gergely Orosz were kind enough to give me permission to include some of their mobile analytics in this discussion. I want to highlight two powerful analytical techniques using their real-world data.

Embedded within most apps are a few keystone features that drive conversion (from eval to paid, prospect to customer, fan to fanatic) and Cocktail Flow has one under development, Shopping Assistant. It does not yet connect directly to a store and, as a nascent feature, is not yet a centerpiece in their UX design. Here is what I was able to deduce from the Runtime Intelligence data:

With Runtime Intelligence, I am able to map out the full usage trail, feature-by-feature, session-by-session, and so I am also able to visualize:

I can also see that the overwhelming number of Cocktail Flow users using this feature rarely used more than 10 features in their session and that virtually all lengthy sessions (taking more than 14 actions) were always churning (going back to the shopping assistant feature multiple times).

When this feature is functionally complete to the developer’s satisfaction, they will now have benchmarks to measure feature adoption (increase it over 5.5%) and session behaviors (when, how often, and under what circumstances the feature is used) all relating to what may ultimately be their most lucrative app feature.

In the Cocktail Flow example, we focused on a single feature. With Mobile Sommelier, we are going to add a few more dimensions.

The following graphic shows, as a relative percentage, how often ten selected features inside the Mobile Sommelier application were used over a 6 day period.

What we can see immediately is that there is very little variability over time. The population of users generally uses the application in the same way over time.

What can we do with this perspective?

If we were to release a new version of this App, we could immediately see any meta shift in behavior across the two versions (Runtime Intelligence will automatically roll-up multiple versions and then break them out when asked).

What CAN’T we do?

While we can see how often the “ShowTasteCard” feature has been used, we CAN’T readily determine which wine/food pairing users are most (or least) interested in. We can’t analyze custom, application specific data.

Luckily, Runtime Intelligence CAN grab this data – with no programming – all post-compile. For example, this (very busy) chart shows the how often (by percentage) users want to pair wine with specific foods (like BBQ or spicy Chinese) AND it is further broken out by country. 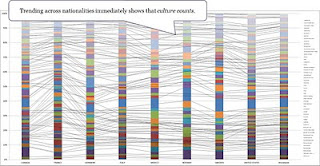 Of course, this is too busy to read in its current form, but the trend lines do immediately show that while all users may use the “ShowTasteCard” with generally the same frequency (as indicated in the last graphic), it is clear that they use the feature DIFFERENTLY, e.g. they care about different topics. Culture counts! 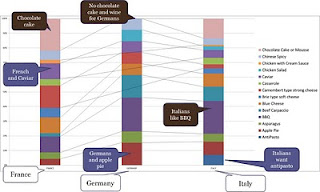 Focusing in on just three countries (France, Germany, and Italy) and focusing on just a few of the food options (from AntiPasto through Chocolate Cake), we can see genuine differences in user behavior and preferences.

Perhaps it is not surprising that French are more interested in Caviar, Germans in apple pie, and the Italians in antipasto.

On the other hand, maybe we were not expecting Italians to show such a strong interest/preference for BBQ. Could this data point to a way to sell Zinfandel (a US export based on a grape that originated in Italy) into the Italian market? – as the US wine for US food (BBQ).

At the end of the session, the developers generally agreed on the following developer patterns:

Other conventions and best practices

Application Analytics are not your older brother’s web clone for the phone!

In a nutshell, this means that these analytics include:

Anyhow, I am ALWAYS eager to hear from developers who have employed analytics in cool and innovative ways – PLEASE reach out and share the wealth! Thanks

Posted by AppsRpeople2 at 5:14 PM No comments: